Cleveland, OH. October 4, 2018 – GE Lighting has helped pave the way to shave 1.2 billion kWh of electricity use in consumer homes by converting Walmart shoppers from traditional light bulbs to energy-efficient LEDs over the last two years.* Not only has this shift supported Walmart’s Project Gigaton, a Walmart supplier initiative aimed at reducing greenhouse gas emissions by one gigaton by 2030, the shift is also leaving a measured impact on consumer’s energy expenses.

By switching customers from traditional to LED bulbs over the past two years, shoppers will save more than $2 billion collectively over the life of the LED bulbs.** LEDs use 70 to 90 percent less energy than traditional lighting options and last 15 to 25 times longer. GE Lighting encourages consumers to use October, Energy Action Month, as motivation to make the switch. To help, GE offers more than 100 energy-saving LED products at Walmart, including 36 ENERGY STAR LEDs, all $2 to $4 bulbs; ensuring consumers can make the switch to an ultra-efficient LED at every-day low prices. 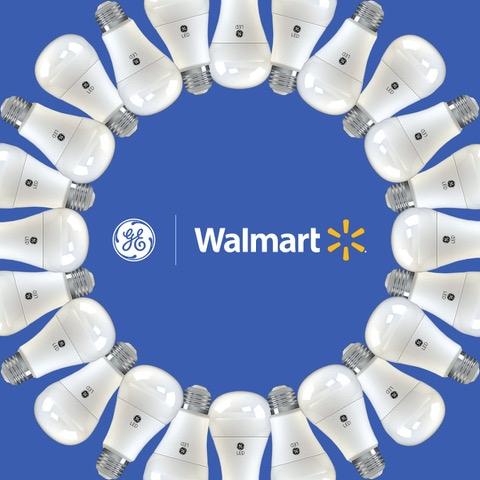 “GE Lighting is proud to support Walmart’s sustainability efforts as we help consumers shift to energy-saving LEDs,” says Daraius Patell, North American Consumer Leader, GE Lighting. “Today LEDs are available for every socket in every room of the home, and while LEDs now eclipse sales of all other technologies combined, about 70 percent of residential lighting sockets still contain a non-LED bulb. This means consumers are missing out on the energy-savings and long-life of LEDs, changing bulbs out more than they need to be and missing out on opportunities to reduce greenhouse gas emissions.”

GE’s commercial LEDs from Current, powered by GE, also are being used across Walmart stores and facilities, from refrigerated display cases to parking lot and interior lighting. This LED initiative supports Walmart’s science-based target to reduce emissions in its own operations by 18 percent by 2025. As part of an ongoing commitment to energy efficiency, Walmart has installed more than 1.5 million LED fixtures across more than 6,000 stores, parking lots, distribution centers and corporate offices in 10 countries. With energy costs traditionally representing one of the company’s largest operating expenses, the monumental energy initiative over the past decade has reduced lighting energy consumption and reduced costs by more than $100 million.

*Represents kWh energy saved over the life of each GE LED sold at Walmart from 2016-2017 vs. a comparable halogen or incandescent product.